Carmen Tam, President and member of the Holy Family Hospital (HFH) Auxiliary (the group that supports the operation of the HFH gift shop), states the team  operates under a simple mandate.

“All proceeds from the gift shop will be used for the benefit and comfort of the patients and residents of HFH; and for any items that cannot be supplied from government funding.”

Although there hasn’t always been a gift shop, the guiding principle of this mandate has provided a foundation for the actions of the Auxiliary over the past six and a half decades.

Let’s take a look back at how the Auxiliary began.

The Auxiliary comes from humble beginnings.

When the group was officially formed in 1957 member dues were just $1 a year!

The first official event the group hosted was a tea, held at HFH on December 11, 1957. From there followed a series of bake sales and raffles with the proceeds being donated back to HFH and members giving their time to doing mending and letter writing for patients.

To give you a sense of their early devotion, by the time the group met for a second time there was just $14 in the account, but that didn’t stop them from donating $5 back to the hospital. Although a small amount financially, the action set the tone for years to come.

Though the fundraising was small in scale, the impacts the Auxiliary had on HFH were notable from the start.

In 1960 they purchased the “Joy Wagon” – a cart designed to make it easier to deliver items to patients. It was designed by one of the Auxiliary members herself and was stocked with things like toothpaste, brushes, tissues and combs.

By 1968, the Auxiliary had purchased a total of almost $10,000 worth of items for the hospital. Everything from a meat tenderizer and an ice machine to a PA system and books.

But their contributions were not only monetary. In 1975, when the hospital was set to be expanded, the Auxiliary took it upon themselves to knit enough blankets to cover every bed!

They opened a gift shop.

With the expansion of the hospital, the Auxiliary was given the space to open a gift shop which provided them with a new way to generate funds.

This increase in income made it possible for them to purchase more expensive items. Think things like therapy room equipment, lifts for patients and even patio furniture.

They even funded the stained glass windows in the chapel that remain in place today. Originally installed in 1993, they were blessed by the priests of Corpus Christi Parish. 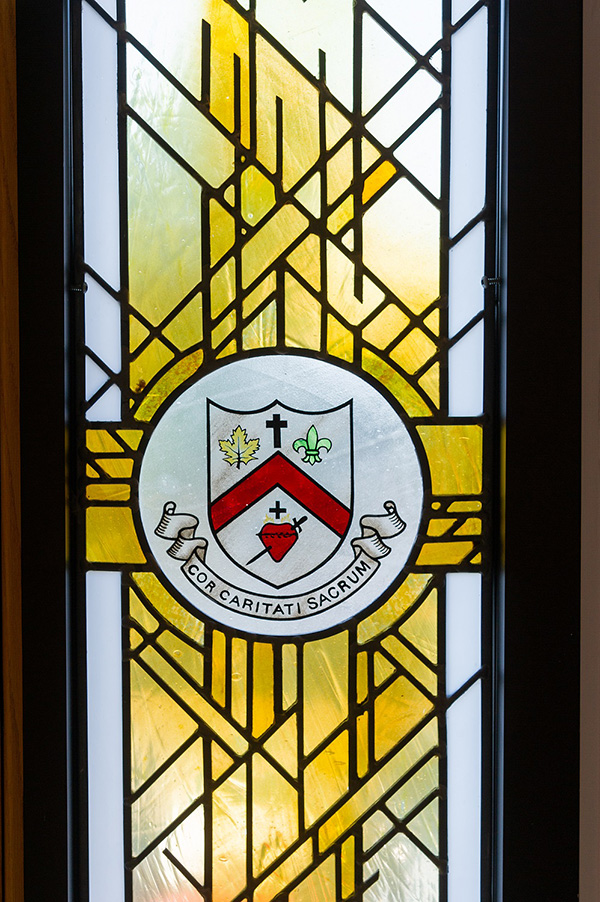 And the next year their contributions grew again when they helped to fund the building of Easy Street—a space with a grocery store, bank machine, car and curbs that creates a realistic environment for patients to practice necessary skills in a safe and non-threatening manner. 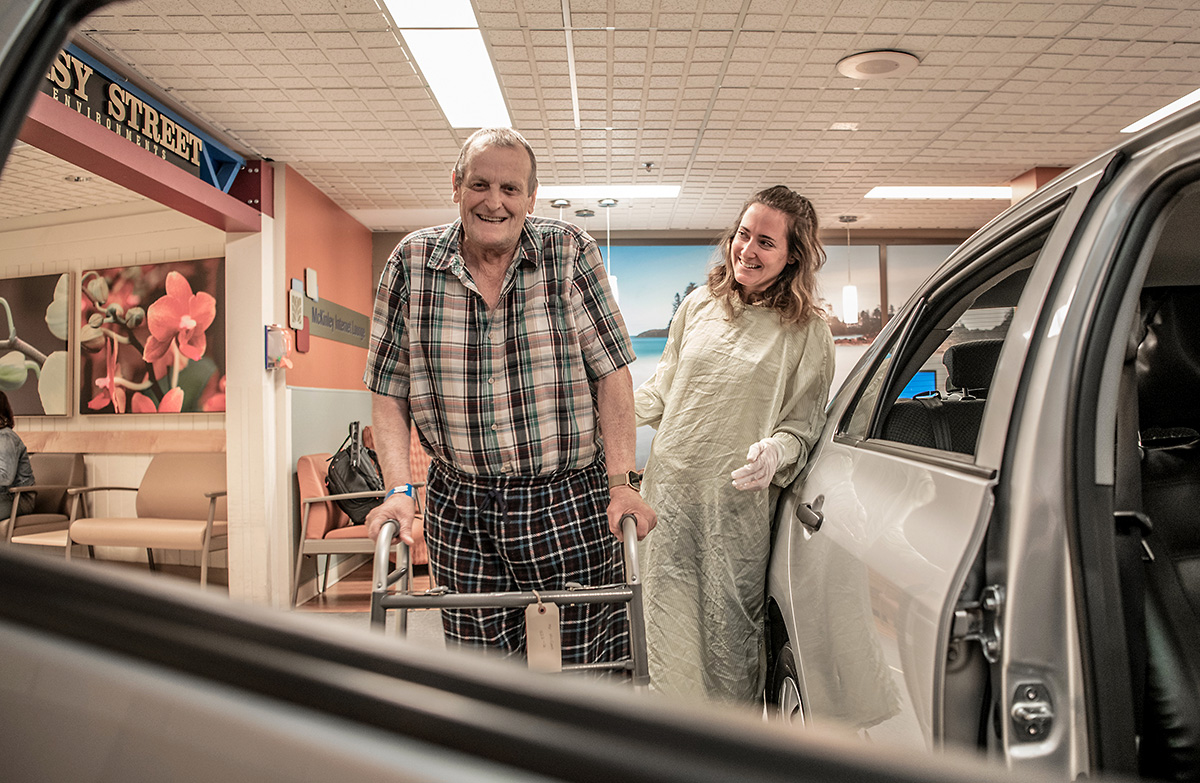 Then the pandemic happened.

In 2019, the Auxiliary funded just over $15,000 worth of items for HFH, but then in 2020 the pandemic forced the closure of the gift shop. Fortunately for the patients and residents of HFH, this didn’t slow the group down.

In 2021 the Auxiliary was able to support the Patient Comfort Fund—a fund for residents who don’t have money for personal care items— for the Social Work Department at HFH, as well as contribute two benches as part of the landscape upgrade project. Then, in June 2022 they funded a lunch for Indigenous Peoples Day.​

And finally, after two long years, the gift shop reopened on August 7, 2022.

And now, they’re back!

Although numbers have dwindled with only 12 members (a third of those from pre-pandemic times) remaining active in the Auxiliary, the small but mighty team continues to make a difference.

The gift shop is once again open for business and fully stocked with snacks and drinks, personal care items, wallets and handbags, gift items, trinkets and scarves, and even some hand knitted items. 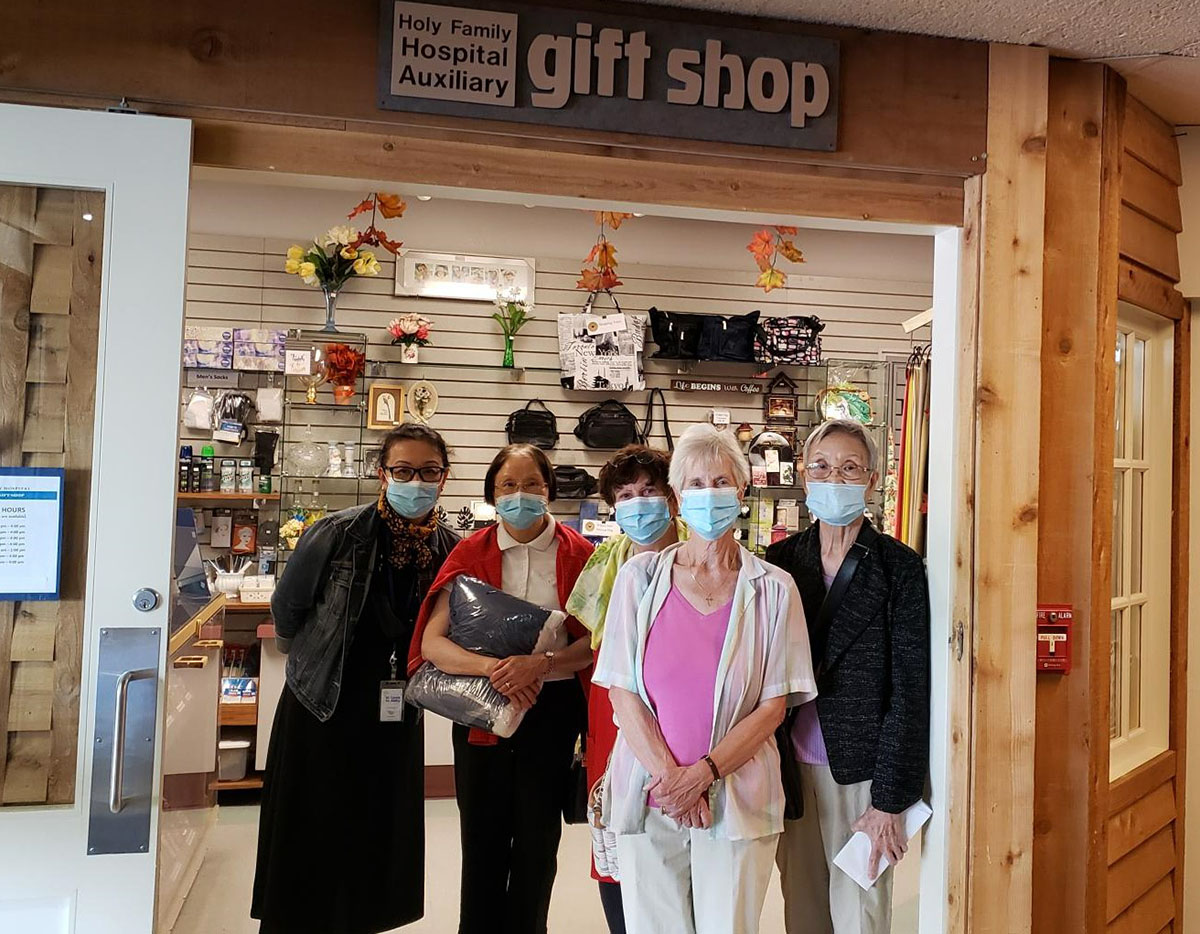 Come early 2023, the Auxiliary will once again undertake their annual tradition of working with the leaders of HFH to gather their wish lists of items for the upcoming year to review, vote and approve for funding.
And this process will continue, hopefully, for many years to come.​

Beth Hazel, Coordinator for Volunteer Resources at HFH shared,
I  am so grateful for all that the auxiliary does, and it’s wonderful to see them back on site again.  They are compassionate and generous and want the best for HFH residents and staff.

Warmest congratulations to the members of the Holy Family Hospital Auxiliary on reaching this milestone year! And thank you for all the work you have done and continue to do for the patients and residents of HFH.