To close out Music Therapy Awareness Month this year, we feature a story about some of the innovative work being done to support Providence Health Care’s long-term care residents.

That feature is important, since some residents of Providence Health Care’s long-term care home have limited range of motion and mobility.

Soundbeam is a British-developed music system whose motion-sensors lets users create music with a simple movement from any part of their body. A wave of the hand, a wiggle of a toe, or the wheeling of a chair in and out of the beam can create sound.

“Residents interact with Soundbeam and can create a full song with the help of the music therapy team, which programs, adjusts and controls the different components of this technology,” says Rhiannon Weiman, a Providence music therapist. “It creates so much more accessibility to music.”

For instance, some residents can’t lift a maraca to shake. However, with the system, they can create the sound of one by moving any part of their body.

Soundbeam’s “brain” is a console programmed with popular songs from different musical genres, from standards to jazz to funk. There are show tunes like Over the Rainbow, carols like Silent Night, and kids’ songs like Old MacDonald.

And Happy Birthday, of course.

Music therapists can add other songs and sounds tailored to users’ tastes. “It is so modifiable,” says Weiman.

Devices that resemble red microphones attach to adjustable stands and connect to the console to emit music or sounds. These “Soundbeams” create the music.

To activate the audio, residents simply wave their hand in front of the Soundbeams. A movement of their legs or feet will also do the trick for those unable to move their hands.

Four pedal-type devices that can be tapped with a finger or a foot can play back tracks and produce a multitude of different sounds, like percussion, bass, chord sequences, harmonica or whistles. 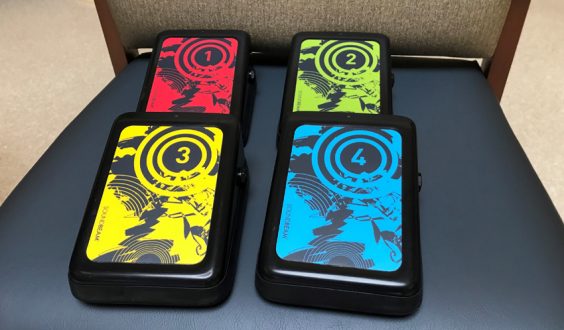 Tapping these pedals produces a range of sounds.

When all components interact, the magic begins. Residents immediately engage.

Bounsuan Keomany, 67, is an example. The resident has cognitive impairment and difficulty moving his right hand. But he loves music.

His short-term memory falters. Yet when Weiman gently asks if he would like to sing along to the popular Asian ballad, Shanghai Beach, he nods enthusiastically.  She positions his hand to activate the sound and Keomany immediately sings along. He knows all the words.

When Soundbeam plays the Hank Williams classic, ‘Hey, Good Lookin,’ he taps along on the armrest of his wheelchair with his left hand. He is having a great time.

Music is a powerful force that can elicit not just deeply embedded memories, but also emotions. “”Along with expressions of joy and laughter, crying can also occur during the music, and we’re there to support the residents through their complete range of feelings,” says Weiman.

Soundbeam can be adapted in countless ways to meet residents’ abilities. Songs can be made in different degrees of complexity. Residents can create melodies that move up the scale by waving their hand further away from the Soundbeam. They do the reverse to move back down the scale.

“Soundbeam adds more accessibility to music than instruments,” says Weiman. “It gives them so many more options to create music than simply by playing instruments.”

”It’s opened up a lot of doors for them.”