Looking Back on Skunkworks: Hacking Wounds

A unique innovation event designed to tackle the challenges faced by patients and communities when dealing with wounds, both in Canada and around the globe, brought together a diverse group of people to find solutions to this significant health issue.

Providence Research, in partnership with St. Paul’s Foundation, held the second annual Skunkworks event, Hacking Wounds, on September 22 and 23 at the Holiday Inn and Suites, Downtown Vancouver. The term “skunkworks” originated in the 1940s and describes a project developed by a loosely structured group of people who identify issues and pilot creative solutions.

What makes Skunkworks unique is its focus on the power of design thinking, which is a human centred and collaborative approach to problem solving that is creative, iterative and practical. Skunkworks aims to develop a culture of innovation at Providence Health Care by applying design thinking to find answers to complex local problems with global relevance, and by bridging the gap between diverse individuals with the goal of solving problems in health care.

Around 100 people attended this year’s session, with approximately 60 attendees participating in the hack – the others were mentors, judges, innovation leaders and sponsor representatives. Marlies van Djik and Josh McCutcheon from The Pivot Group, a consultancy firm that focuses on human-centred design, returned to facilitate the event.

The event kicked off with opening remarks from Dr. Darryl Knight, president of Providence Research, and an address from Fiona Dalton, CEO of Providence Health Care. Sulksun (Shane Pointe), Knowledge Keeper and member of the Musqueam Indian Band and the Coast Salish Nation, provided a welcome to the opening of Skunkworks.

After lunch, presentations were given by mentors and sponsor representatives. A highlight was a presentation by Susan Giles and Evanna Brennan from Action Based Nursing Consultants, who spoke about their 32 years of experience delivering health care to marginalized people struggling with HIV, mental illness and addiction in Vancouver’s Downtown East Side.

Throughout the event, participants had the chance to see innovative technologies in action at a 3D printer and scanner exposé from BCIT MAKE+ and Pantheon Design.

Several problems surrounding wound prevention and care were pitched to the participants – including a few impromptu ones from the participants themselves. Teams were chosen organically around which problem people wanted to work towards a solution for – they were encouraged to “fall in love with the problem, not the solution.” The resulting seven teams spent the first day creating, developing and focusing an approach to their problem and generating ideas for a solution.

Day One wrapped up with a workshopping activity called “Flamethrowing.” The teams showed their “ugly baby” (their idea under development) to each other and received feedback, which was used to refine those ideas in preparation for Day Two, when it would be time to build a prototype and pitch their idea to a panel of judges.

The idea behind prototyping, explained facilitator Josh McCutcheon at the beginning of the second day, is to make the minimum viable product. It’s an opportunity to fail early and often, to ask more questions and be fiercely curious about your idea. He gave some examples; sketches, stress balls made from tape, and a cardboard iPad rigged with scrolling paper to show the screen changing.

The teams then had time to work on creating their prototype and to test it with users. One impressive example was a friction-reducing shoe made of cardboard for diabetic foot ulcers (DFU).

After a working hard to come up with a solution, refine the idea, and create a prototype, it was finally time to present to the judges, who had a challenge in front of them to pick which of the seven innovative ideas would receive an award.

The Technology Accelerator Award went to team Woundification. They pitched an app that would help people take early action to treat wounds. The user could take pictures of a wound and the app would help identify it, recommend a treatment, and remind the user to seek care.

The Research and Innovation Award went to team Lana – the world’s first dynamic offloading shoe that would help combat diabetic foot ulcers by minimizing friction and pressure and adapting to foot changes in real time. They were the team that built the prototype cardboard shoe. 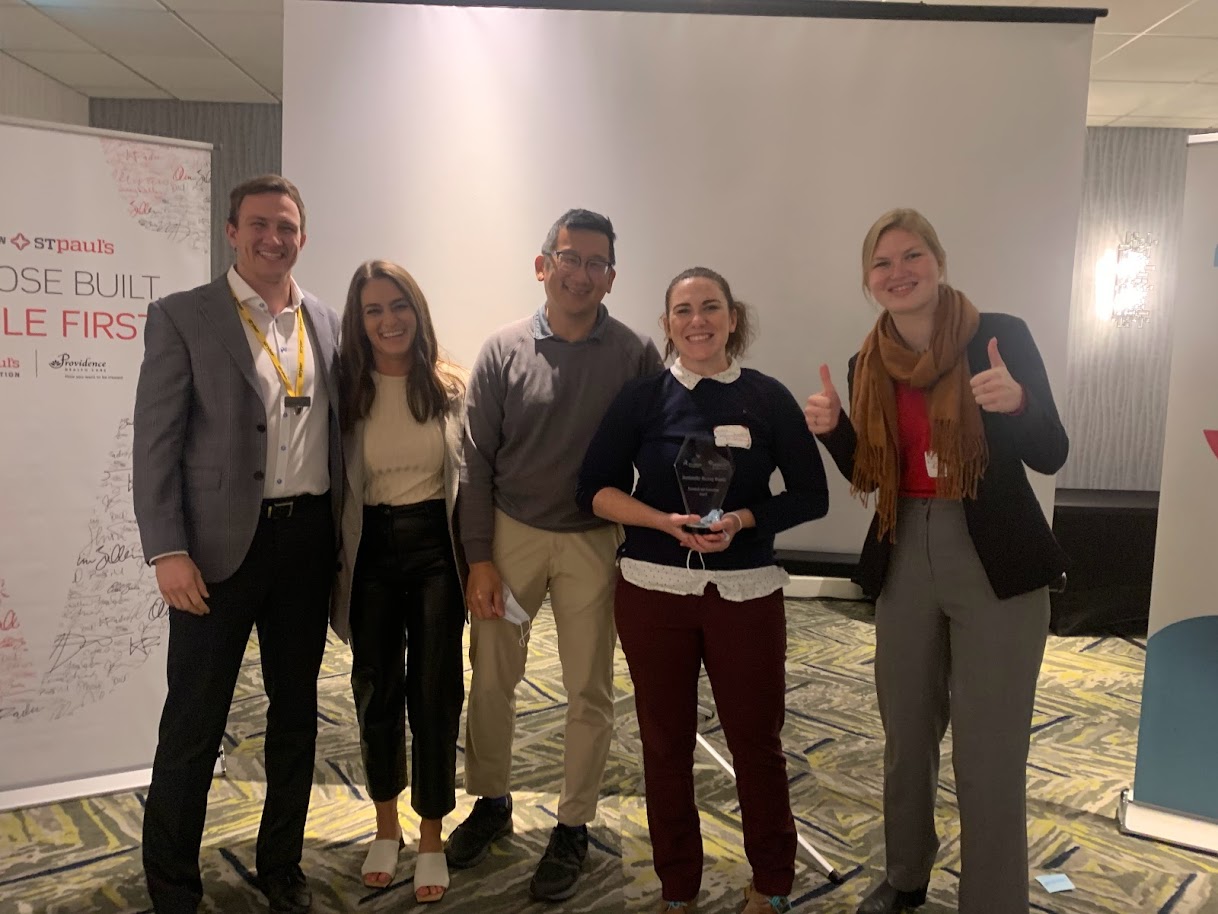 Team Lana after being given the Research and Innovation award.​

Lastly, in surprise turn of events, the judges decided during their deliberation to create a third award, the Social Justice Award, which went to team On-Demand Wound Services. They pitched a pilot service that would bring wound care to underserved people, potentially through a nurse or peer worker, and distribute to-go wound kits for those who can’t wait or would prefer to do their own dressing.

Skunkworks: Hacking Wounds brought together a diverse group of people to share their ideas, work towards solutions to pressing problems in wound care, and be catalysts for innovation. The winning teams will continue to work with academic partners and develop their ideas.

Stay tuned for updates and for future Skunkworks events.​​​