Hemophilia: ‘It’s not even the same disease anymore’

Every year on April 17, World Hemophilia Day is recognized worldwide to raise awareness of hemophilia and other bleeding disorders.

Thomas is the proud owner of two new knees. He had one replaced 18 months ago and the other one replaced earlier this month.

As someone living with severe hemophilia, a bilateral knee replacement was out of the question for him in the 1990s when his arthritis reached a point where he needed the surgery. Thanks to new treatments, his 27-year wait is over.

“It just blows me away that a hemophiliac can come in, get a knee replacement, and be back home within a few days,” he says.

Thomas was diagnosed with hemophilia 66 years ago when he was just a baby. He and his older brother were both born with the inherited bleeding disorder where the blood does not clot properly. So were several of his cousins. His mother and his mother’s sister were both carriers.

“At that time, there was no such thing as hematology,” he says. “Our family doctor was our hematologist.”

Thomas grew up in Edmonton in a family of five children. His parents helped him and his brother understand their limits – no gym class at school, no organized sports, no roughhousing. Still, their childhood antics landed them both in the hospital – a lot.

“My mom might have spent more time in the hospital than some of the nurses,” Thomas says. “It must have been tough bringing up two rock-throwing hemophiliacs – especially when we were throwing rocks at each other.”

At that time, when he needed treatment it meant a transfusion of whole blood.

In the late 1980s Thomas moved to the Lower Mainland and got involved with the Adult Bleeding Disorders Program of BC/Yukon​, then located at Vancouver General Hospital and now housed at St. Paul’s Hospital.

Since 1972, the program has provided specialist interdisciplinary care to people with inherited bleeding disorders across BC and the Yukon, such as hemophilia and von Willebrand Disease. The care team is comprised of four part-time physicians, two Nurse Practitioners, a physiotherapist, care coordinator, clerk, research assistant and a social worker.

Outpatient clinics are held at St. Paul’s and in four outreach locations: Kelowna, Nanaimo, Prince George and Victoria. Many specialists at Providence have developed some familiarity with the conditions and contribute to the outcomes achieved. 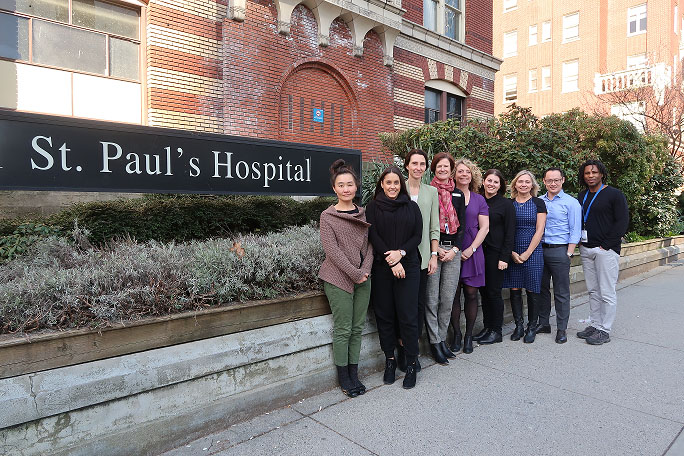 “That inability to produce the coagulation factors creates a spectrum of bleeding symptoms that can range from severe and life-threatening, showing up early in life, to those that appear in a less dramatic way and can sometimes be missed by patients, families and medical professionals for years,” explains program Medical Director Dr. Shannon Jackson.

Patients are treated with a number of strategies including self-infusion of the clotting factors they are missing, or increasingly using novel treatments that provide protection from bleeding.

The program follows over 750 patients with bleeding disorders; about 350 of those patients have hemophilia. With an estimated 400-plus adult hemophilia patients in the province, the clinic endeavours to reach those who are undiagnosed or unreferred.

“Attention is needed quickly if bleeding occurs along with preventative care around major and minor procedures or injuries, regardless of whether patients have a severe or mild classification. Also, patients and care providers should be careful about the word ‘mild’ because it implies nothing bad can happen,” Dr. Jackson says. “But bad things can happen when patients with mild hemophilia experience bleeds and have no access to expert care. There are survival benefits for all patients with hemophilia attributed to having this model of care.”

The Adult Provincial Bleeding Disorders Program has been awarded the 2022 Recognition in Delivering Value-based Healthcare by the Canadian College of Health Leaders (CCHL) for embracing value-based health care delivery on a Provincial scale over the past 10 years.

“The program has been working on many of the foundational elements of value-based health care for quite a long time,” says Dr. Jackson. “This award is shared by current and past people on our care team who are pioneers in terms of their dedication and willingness to try things differently.”​

Key to the re-design of care was a dedicated approach to patient engagement, measuring patient relevant outcomes and using these outcomes to inform improvements to care. Value for patients has improved at both the individual and population level, resulting in more efficiency in care and allowing for increased access and program capacity, with modest investment.

The experiences are a proof of concept that the VBHC approach works when applied with patience and a long-term vision in a population with complex chronic disease who have shared needs. Many of the lessons learned over the years in this clinic have been bolstered though Dr. Jackson’s formalized education and training in VBHC. Now, Providence Health Care is poised to apply VBHC to other populations at Providence Health Care as part of their Mission Forward​ Strategic Plan.

“One of the things we have always benefitted from is learning from our patients and letting them give us guidance about what their needs are,” Dr. Jackson says.

‘Not even the same disease anymore’

Today, Thomas is treated with a new drug called Hemlibra which prevents or reduces the frequency of bleeding episodes. He orders the product through St. Paul’s and gives himself a weekly injection in the comfort of his own home.

While recovering from knee surgery, he’s also using something called Factor VIIa, a man-made protein used to stop bleeding of injuries by helping the blood to clot. He can administer this at home intravenously as needed.

Hemlibra, along with the use of Factor VIIa and the work of his care team at St. Paul’s, made it possible for Thomas to finally get his knee surgery. His inhibitor to Factor VIII (8) – the very factor in which he is deficient – had previously precluded him from undergoing surgery.

​Although Thomas still has to exercise caution day to day, advancements in hemophilia research and therapies have been life-changing.

“Things have changed so much,” he says. “It’s not even the same disease anymore.”